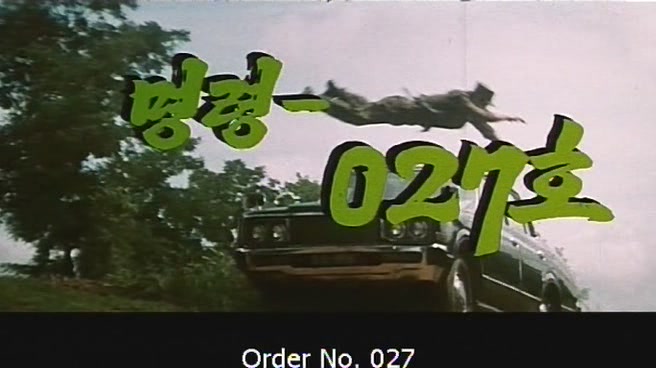 I have an overwhelming need for genre categorisation when watching films, and “Order No. 027” (1986) certainly left me scratching my head. Yes, it’s a war film set during the Korean conflict, but there’s also a strong kung fu element. It could be called a “men on a mission” as the plot mainly deal with a group of elite soldiers sent across the border into South Korea to destroy a military base, but strangely I felt that I was constantly reminded of a slap-stick comedy.

Not that there is much humour to go by in “Order No. 27” – intentional or otherwise –  but sped up action sequences, fight scenes that were more Charlie Chaplin than Jackie Chan and general clunky camera work took me to a place that I doubt I was supposed to go.

Check out the way this daring North Korean spy chooses to fire his gun at the enemy forces:

By needlessly diving Superman style forward. I imagine if even John Woo would consider this “a bit too much”. The opening – which you can see from the title shot – also has the soldiers jumping over cars and smashing bricks on their heads to demonstrate their fighting prowess.

And who can forget the fight scene in the local karaoke bar where the North Korea agent manages to throw a chopstick across the room and get it stuck in a gunman’s eye.

The recurrent theme in the film is that of sacrifice. The soldiers are well aware of the inherent suicide nature of their mission, but are happy to risk it all as long as they can benefit the Great Leader – a theme that has been present in one form or another in every North Korean film I’ve seen. This is best summed up in the film’s ending, where the captain of the unit clings to the wheel of an enemy helicopter as it takes off. Already mortally injured, he detonates a bomb with his last ounce of energy, spectacularly halting the chopper before it can fire on the remainder of North Korean soldiers.

I also think it should be noted that I made it this far into a post with making an “Order No. 027? That sounds like a crispy fried duck at my local restaurant” joke. Oh dear…