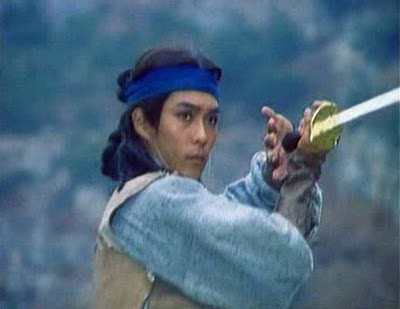 Although not directed by him, or made while he was still resident in the country, Hong Kil Dong (1986) bears all the hallmarks of a Shin Sang-ok production. By that I mean this film, unlike practically every North Korea film production I have seen before Shin became active in the DPRK, does not place the emphasis on propaganda first and entertainment second. Watch the opening sequence of Hong Kil Dong below (you can actually watch the whole film on youtube) and you’ll see that it’s a film which is much more concerned (at least initially) with stylistic kung fu action than it is preaching a message.

The story follows a young child born from the illegitimate union of a nobleman and his housemaid. Not recognized by his father and loathed by his father’s wife, Hong Kil Dong is forced to leave his familial home. On his way, his party is attacked by bandits (paid by the jealous mistress of the house) but low and behold a kindly technically masterful grey bearded man comes to their rescue.

From there it’s classic kung fu fodder: old man teaches the young Hong Kil Dong to be a masterful martial artist though many humorous training montages. From there Hong grows up to be a sort of Pied Piper meets Robin Hood who protects the downtrodden villages from oppression (it’s around about here that we get a good healthy dose of Communist doctrine, just in case we thought we’d missed out).

With excellent wire-work and a lot of sword play and spraying blood, it’s no wonder that Hong Kil Dong was selected by a group of DPRK defectors as the number one North Korea film of all time.